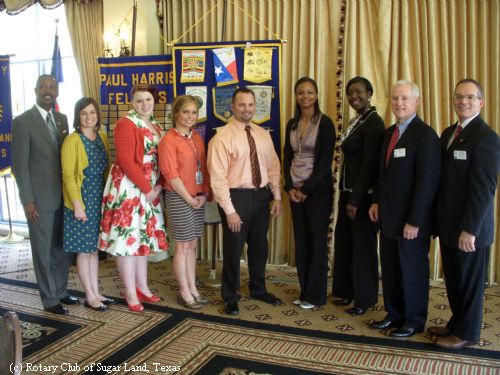 Recently, I got to leave school in the middle of the day to go to a lunch! It was crazy! Leaving! Sitting down to eat! Sitting with my principal! Sitting with important people in Sugar Land!

The Rotary Club of Sugar Land invited this years rookies of the year of the district to a luncheon. I was selected at our school (in all honesty – we didn’t have hardly any other new folks), and I had to write an essay. I was pretty proud of my essay. So proud, I sent a copy to my parents, and my dad copied it and sent it to my grandma. My lovely mentor, Lauren, and my principal wrote about me as well. Lauren has a magical way with words, she made me sound pretty phenomenal. Now, they were true things, but she just made them sound incredible.

We all had to speak, and it was pretty nerve racking. I talk in front of ten year old kids everyday, but they aren’t adults or business leaders of our community, or strangers. One of the women talked about the fact that every year there are more and more cuts, and every year we hear things on the news, but every year there are great things happening in our classrooms. It is true. These teachers were truly impressive, they were very passionate about their job and making a difference. I loved hearing their speeches about why they wanted to teach and how amazing the support of fellow teachers has been this year. There are so many amazing teachers in the world, and they don’t always get the recognition they deserve. There are many thankless tasks in teaching. I work with so many amazing people. These people are creative, compassionate, smart, and very organized. Teaching is a hard job, it takes great mental capacity, patience, organization, and a lot of time. It is the best thing I have ever done.

My first year is almost behind me. I will cherish the memories. The day at the Rotary Club will be one of them.

The article on their site can be found here. I borrowed their picture.

Spring is in the air and things are going a little crazy in the fourth grade. It seems everyone has formed an opinion on everyone else around, and it is not just the kids. As an adult, how do you explain that this is a problem you will face for the rest of your life? People are always going to say not so nice things about you. You might also be saying not so nice things about others, FOREVER! A friend may confide with you an opinion, and the worst part, is that you may find yourself agreeing with someone. Then you tell them you agree, and then they tell your best bud what you really really think about them!!!

This makes me crazy. It irritates me when kids talk about each other, when grown ups talk about each other, and when I find myself saying or agreeing to something regrettable. It is truly a hard lesson to realize the impact of your words on others. It is very easy to say that Steve (the stuffed shark in my class is the go to made up name for everything) is a terrible person because he said I had ugly hair. But, when I say that I hate Steve’s lopsided fin, I’m just being honest. We all do this. We lie to ourselves about what we are doing. THEY are mean, but I am honest.

Last week my partner teacher and I gathered our girls and talked about the impact of gossip. A girl asked what to do if she was the victim. Another girl said she would never ever do such a thing. Another drew a picture in her notebook. Can you really teach a girl not to put down another girl? Or does she have to learn it herself? Does she have to be caught saying something? Then get in a nasty argument to even begin to learn the lesson?

I told the girls that it is easy to fall into negativity, I told them that this is often something I am guilty of. I get frustrated with people. The first instinct we have to vent. Although every now and then we need to get it out there, venting doesn’t really help. When we vocalize that negativity, it spreads. I told the girls that I have a few good friends who remind me, “Girl, don’t go there!” A good friend will listen, but a good friend will also stop you before you say something mean or regrettable. I am blessed to have a few people who do that for me. I want to be that person for others. I want to challenge my girls to be that person for their friends.

Maybe it is impossible to encourage ten year old girls not to talk about each other, grown women can’t stop themselves. We all just have so much more going on in our lives than what we happen to think of other people. If the image I put out, is one of discussing what I think of other people, then what does that make me?

As Eleanor Roosevelt once said,

I’m not sure if what we said made an impact, but hopefully it is a conversation they will remember and reflect on as they grow. In the mean time, my mother suggested I write, “Girl, don’t go there!” on a sentence strip on the back of my classroom door as a reminder. I think I will implement that suggestion early this week.

March was awesome. I set some goals, and I tracked them! I did something ALMOST every day. But, like I said last month, the good people in my life are key contributors to my happiness. I needed a happiness boost. Basically I gave myself a goal I could win with. February was a very tough month, and underneath all the great times I had with people I love, March was pretty tough as well. Keeping up with school has been difficult, my house is a mess, and my brain seems to be a bit of one as well. But, I wanted to spend time with people, and boy did I do that!

I cannot say enough how lucky I am to live in a city full of people I love and care about. My mom, dad, and little sister live only 3 hours away. I was able to go see my little brother this month. There were only 4 days this month where I did not do something with people, I’m going to say that I had 87% success rate on my first goal. There were also several events this month that could qualify for my mini-adventure, I went to the art museum with the Oswalts, Brenham with my mom and sister, Florida to see my brother, and I went to the art festival with Michelle. The official “Friend Night” was on March 25th, but really, I had 27 friend nights.

Onto goal 2. I have nowhere neared mastered the art of integrating working out in my life. But, it is much better than it was in January. I feel stronger too. I lowered the goal to working out only 3 times a week, I wanted it to be more manageable. March was a 5 week month, which means I should have worked out 15 times. There are a few days where I walked all day, because I was doing something fun, and I counted those as work outs. I worked out 10 times, which is a success rate of 67%. Again, still haven’t mastered it. Now that I’ve taken a win, it is time to attack what I pushed off. Eating habits.

I will set up my April calendar a little different. I will record a “W” in the corner of the days I workout. I still need to record, because I will definitely slack off if I don’t keep records. If I met my food goals, I will write nothing in the date’s box. The idea is to keep an almost blank calendar this month. If I write something, that means I’ve tarnished the clearness of the calendar.

The plan, is no sodas (I’m VERY addicted to Diet Coke – I love it and this will be tough), no fried foods, and no sweets. I’m going to keep a food journal. I need to have a better idea of what I’m shoving in my mouth. If I have to write down something not so good for me (because I ate it), then I will have to write the bad food confession in my April calendar.

April is going to be hard, wish me luck!