me: my coworkers are talking about how there are bats trapped in the ceiling

Leah: maybe they will come out and sit on your shoulder

me: i can take up a gig as a vampire. and be in that twilight movie

me: i’ve been looking for something

Leah: and it wont cost you a cent to get there

me: i just have to find one of those bats

Leah: prick your finger, i hear they like blood

A Lion Among Men.

I just finished Gregory Maguire’s A Lion Among Men. 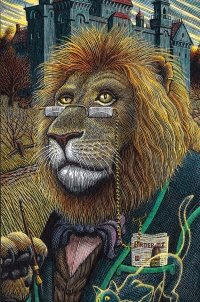 It is the third book in the Wicked series. I adored Wicked and the fantasy world of OZ it recreated. We watched the Wizard of OZ fairly often as children. Mike called it the “Weee of AH” and wanted to see it over and over, which meant that I saw the film many times. It is a magical movie and there really isn’t much that children will still watch that was made in 1939. Gregory Maguire does a wonderful job playing on that childhood nostalgia, but with more adult themes. OZ deals with class issues, with civil war, rule of a dictator, a girl born green and talking animals that are treated as second class citizens. Although I was happy to reenter the world of OZ for a third time, this book falls far behind Wicked and Son of a Witch. The first two books deal with the same family, but the entry of the Cowardly Lion as the main character just doesn’t have as much of a hook. His only presence is in the first book, in the last chapter where he is part of Dorothy’s entourage. The coward never really overcomes his cowardice. His name is Brrr, because he shivered as a cub. Poor Brr just couldn’t hold a story. But, if Gregory Maguire decided to write another tale of OZ, I’d read it. I suppose if you make the trouble to develop a whole world, you would want it to serve as the backdrop to as many stories as possible.
Books
Me Gusta
Posted on January 27, 2009 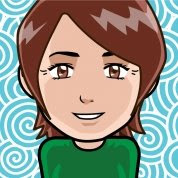 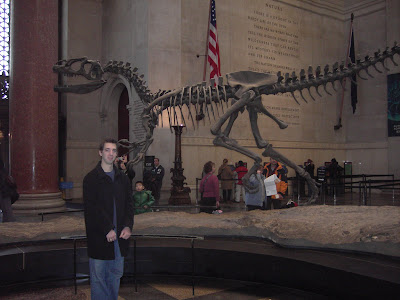 JMO in front of a semi-real dinosaur. As it turns out, museums use fake bones to fill in missing puzzle pieces. This seems a bit like cheating, but I guess no one wants to see half a dinosaur at a museum. 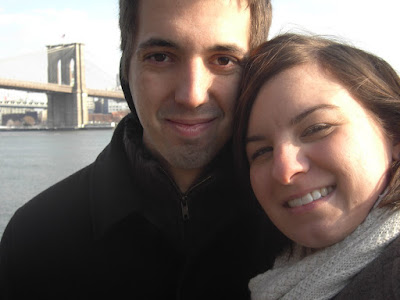 This is not a great picture of either one of us, but it took several takes to get the Brooklyn Bridge in. So behold: JMO, me, and the bridge.

I had a wonderful week off work. I’m thankful for such a nice peaceful time. Tomorrow I must go back to work. I’ve decided that tomorrow is my January 1st. I have still been living a holiday like life, it is time to get back to normal. After the holidays I had a entertain an out of town coworker week and then I had a NY week. So next week is back to life before December. I have not been to the gym since the first week of December or eaten anything particularly healthy for me in the past month and a half. So tomorrow, on my first day of 2009, I will restart my workout routine and eat better. 2009 will be a good year and I’m now ready for it.

Today is my last day in New York and my last day off from work for awhile. This is the third time I’ve been to NYC in the past year, with JMO coming home, it will probably be my last trip visiting a resident of the city. Any future trips will probably consist of paying for a place to stay. Gross.

This year really more than any before, I haven’t worried incessantly on a trip, thus ruining half of it. I still get concerned about getting lost or not knowing where the nearest restrooms are. But I have become more comfortable with the unknown. I’d like to give partial credit with mellowing out and partial credit JMO. The boy repeatedly tells me that something is not near as big of a deal as I make it out to be. After two years, I think the theory is starting to sink in. Some things are a big deal. A lot of things aren’t. (No more vacation for awhile is a big deal). It may sound silly to someone who does not freak out on a regular basis, but believe me- being calm is wonderful and I like it a lot.

We are about to head out to enjoy the Natural History Museum and today has warmed up to about 40. It should be a fun final day.

My sister has turned into a teenager. 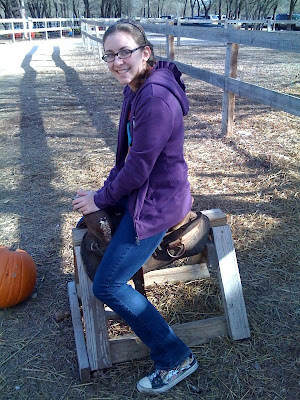 The Emily Pickert that hates clothes, braids, headbands, matching shoes and anything but a volleyball tshirt has changed. This new person is taller than me, fitter than me, maybe smarter than me, and cares about her ensemble. I really never believed she would grow out of throwing a fit when I bought her a dress or looking at me like I was crazy when I suggested a purse. This girl carries purses. I like her. I look forward to forcing her to be a bigger part of my life. We are nearing an even playing field and can now carry on a conversation lasting longer than 10 minutes. I look forward to a life of travelling with my baby sis, shopping, going to museums and movies and confiding in her. Emily Pickert is one cool TEENAGER.
EP is pictured at the Feista Farm, she did not want to ride the real horse.
Emily
Family, Photos
Posted on January 12, 2009