A year ago today, I was setting up a classroom. I was trying my best to get a room ready for 26 kids who would show up Monday morning. I was an absolute complete wreck, it was terrifying. I froze when asked where I would teach from. I froze when they asked where they should put their backpacks. I froze when parents asked what my name was. Preparing a classroom takes time, and time I did not have. Things worked out beautifully. I loved the kids and they didn’t seem to realize I wasn’t as prepared as I would have liked to have been.

This year I had time. Last week was mandatory back to work, but for the 2 weeks before that, I went and spent time in my room. My sister and Mrs. Oswalt came to help me. My mom and JMO came up to see all I had done. Time is a gift I am grateful for this year. I am also extremely grateful for the amazing support system I have in my life. The people I love gave me gifts for the room and worked hard to help me. I couldn’t be happier with the result.

This is a pop up shark, he is now the treasure box. Kara found him at Target. Thanks Kara! My mother and I spent half a day at JoAnn’s fabric looking for something for these curtains. I had fully intended to make them myself, but my momma took over. Moms are good that way. Emily helped me put up all my boards and border, helped me make letters and die cuts, and then decided she would free hand cut ‘Pickert’ out of fabric and fix it on my desk cover. Emily is an awesome little sister. Mrs. Oswalt took it upon herself to buy me shelves! Don’t they look great? JMO came up and put them together for me. Mrs. Oswalt also sorted all my books for me. She’s a nice lady. Emily also cut out “What are you reading?” out of construction paper, glued it to more construction paper, and broke my laminator trying to fit it through. It looks pretty great (laminator was then fixed by JMO). My Aggie Cheerleader bear was a gift from a kid last year; I think she looks perfect in the corner. So, after three weeks of doing a little here and there, my room is done. Lots of people helped me, and I am so thankful to have such fabulous people around. 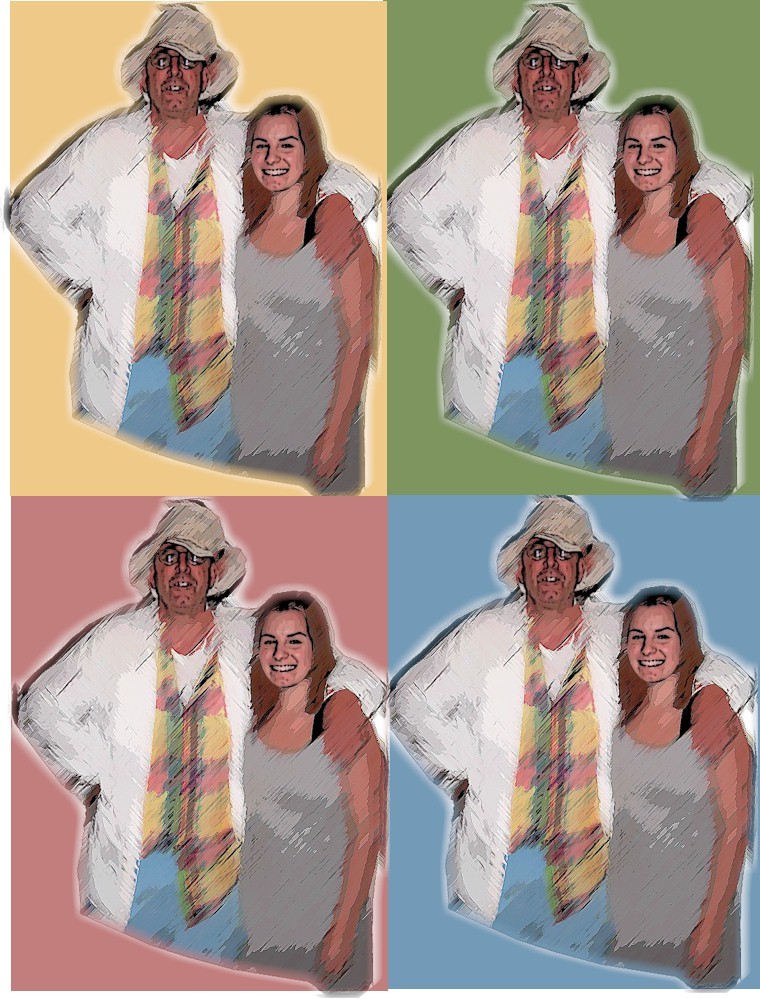 As a fun holiday gift, JMO’s dad decided to find me something on Etsy. I adore Etsy, and it’s fun to search for unique items and I love the pleasure of giving my money to a person.

Well, Mr. O decided that he could make his own Etsy item. He edited this picture of me and my dad and gave me the print and the file. I like it.

A Holiday Evening with the Oswalts Before Christmas JMO’s family and I went to see A Fertile Holiday at the Radio Music Theater. The show was hilarious. There were three actors who played many different parts, I suppose you could say they wore many hats. They have done this particular show for the past 26 years. Apparently the theatre will be closing down this Spring, the actors are ready to retire. The show was a hoot, and I was really glad we got the chance to see it in its final year.

I didn’t take any pictures at the show, but we did take a few pictures while we were waiting to go inside. Although Trent looks angelic, I think this is a pretty fine photograph of the Oswalts.

I first met JMO’s little brother at a football game almost four years ago. Trent was shorter than me then. I know that shouldn’t matter so much, but I always want to tell him, “I used to be taller than you! There was that one time!” Here he is sitting, so I clearly tower above him. Trent reminds me a lot of my brother. He makes friends whereever he goes and he is always up for anything. Whatever he ends up doing will be interesting (also like my brother). He is heading off to Oklahoma State, and I have no doubt he will have a million friends and a million job offers before he graduates college. The kid cleaned up on gifts. Here he is with his iPad (gifted by his brother). JMO swiped his computer the day before and put all his stuff on it, including an art project Trent did and used it as the background.

My favorite part of the weekend was getting to spend time with and meet various relatives of the Oswalt clan. I met cousin Oran, he was quite entertaining. I got to spend some time with JMO’s dad, Granny and Aunt Carol. I got to hang out with JMO too. I also met one of the cutest little girls I have ever. This is Berlin, JMO and Trent’s cousin Nicki’s daughter. She laughed a lot.  There were many kids around and she LOVED playing with them. The Oswalt family officially has grown-up boys now. Trent will be good at this grown-up gig. If not, he has a million friends, so he won’t ever be out of a place to live.

The Pioneer Woman Comes to Town

This past weekend I had the opportunity to go the Pioneer Woman‘s book signing. It was originally going to be at a tiny bookshop (Blue Willow Bookshop) but the they weren’t going to have space in their 1200 sq ft store for all the ladies that came out to see the Pioneer Woman. It was moved to Georgia’s Farm to Market. It was an adorable local grocers that had dining room tables all over the place and teas, coffees, snacks, and foods to consume.

We got there a little after 11:00 and got our cookbooks and found our seats. The PW answered questions at 1:00 and then the cattle call began. The 500 or so women were broken into color groups and we were called by color. Mrs. Oswalt and I were part of the “PETAL” group.

While we waited our turn, we drank coffee and looked around at all the interesting teas, coffees, herbs and foods to see. We also talked to these ladies. They were in the “LIME” group.

Sandra and Monica were on hand to converse with us. We talked about which recipes we thought we might try. Monica brought sticky notes and tabs so we could mark recipes.

Then (several enjoyable hours later) Mrs. Oswalt and I met the Pioneer Woman. I told her about the dark chocolate cranberries we ate and she seemed genuinely interested. She truly was friendly and sweet and made an effort to speak to every single person who came. She also gave everyone who came to see her a T-shirt.

We got our cookbooks signed and then he seemed strange to leave after being there for so many hours. The cookbook has pictures of every step of the way, which makes me want to give some of the recipes a chance. The food looks delicious and the photos in the entire book are of her ranch and family. You should probably buy it.

P.S. Sandra and I made the enchiladas and guacamole in the book. It was hard work and my fingers burned from all the cutting. They were tasty!.