I got JMO back.

I got my tax return back (which I deposited into savings).

We saw Confession’s of a Shopoholic. (I thought it was adorable and want to go buy things I can’t afford now.)

Had a great lunch with Christine and Justin.

Ate a homemade dinner with the Oswalts.

Life is pretty good. This girl can’t complain. EXCEPT…. why is everyone off for President’s day but me?

Thinking back on a day.

Tonight at youth group we asked the kiddos to write out what they did today, then categorize it out to the side. Rode to school with your parents? Family. Took the dog for a walk? Nature and health. Mean to a sibling? Not family. Learned something new? Learning.

After I made my list and was about to categorize, all I could think about was what was missing. I continually sleep in late, I didn’t cross anything off my to do list and there was no physical activity on my list. I could have gone for a jog at 7am, even that is after normal people start their day. There was not a moment during my work day where I went out of my way for anyone, in fact I continually did what I wanted. I chatted. I didn’t see clear categories here, not a time to better myself, health, nature, family, or community. This was suppose to show them what was important to them, but it showed me that I didn’t have anything important squeezed into my day.

While I was looking at the negatives, all my kids were looking at the positives. For one, everybody seems to wake up about 6am (but I suppose they don’t stay at school until 7pm). One guy said that he usually says his day is terrible, but if he really thought about the day, he could see a lot of positives in it. Another kid said that he always feels like he doesn’t do that much with his time, but when he wrote it all down, he felt like he accomplished a lot today.

Since the bed is my favorite place.

I probably have sleep issues and getting out of bed is a daily struggle. I would live my whole life from bed if possible. 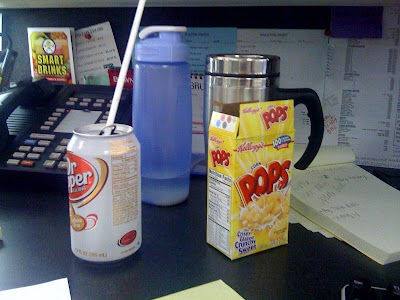 This is the daily array of my desk. Throughout the day the number of coffee cups, water cups, cups from home, and various snacks cluster together. I don’t ever clean any of it until I’m about to walk out the door (which is a habit I’ve considered changing, but haven’t gotten around to yet). Not only am I messy at home, but I’m also messy at work, this should not be a surprise to any of the five people who read my blog.
I feel the need to acknowledge the soda on my desk. I wanted something to drink and didn’t have the time to make tea, and didn’t want to make an effort to get a cup and walk over to the water cooler. Soda is the easiest choice, you just reach in the fridge and grab. Although I would like to get credit for getting the caffeine free version, I still had a soda. I fell off the wagon. I’ll get back on- promise.
snacks, Work
Photos
Posted on February 9, 2009 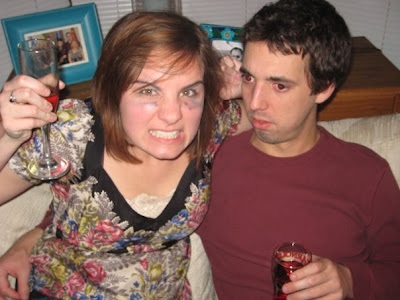 Whitney posted this gem on facebook. My first thought was “OH MY.” Second was, good thing I wasn’t tagged. Now? Now, I think this is hilarious. The quizzical look on JMO’s face is priceless. I tried to put make up all over Christine’s face, and she got her revenge and I look ridiculous, and I may be growling- not sure.

Hopes and dreams for my tax return.

Savings will win out, probably a combo of future trips and car fund. I may treat myself to something around a $100. The thrill of getting money that isn’t earmarked for LIFE is consuming my thoughts. Other suggestions to daydream about are being accepted as well.