2012 was an amazing year. It has been crazy busy, it held some surprises, and some adventures. Life has treated me well, and for this I am grateful. In fact, life just keeps getting better and better. 2011, 2010, 2009, and 2008 were all wonderful.  I have blogged less and less over the past four years, but I am so glad to have the last few years’ memories right here. This year has provided many challenges and many times for reflection. I am so proud of the direction my life has taken. I learned great challenges come with great rewards in 2012. Everything that has come my way has done so for a reason, let’s see what 2013 throws at me!

Each year gets bigger and better, 2013 will be amazing. Happy New Year! Christine is getting married and the festivities have begun! Her party was wonderfully planned by the maid of honor, Kim. Kim gave all of us bridesmaids (pictured above) our tasks for the day. When you only have to be responsible for a fraction of the shower, it is not nearly as overwhelming. My fraction of the shower was to make the sangria. And if I say so myself, it was well done. I used The Pioneer Woman’s recipe from her cookbook. Christine’s Great Aunt Jeanette brought me a piece of paper and a pen and told me, “Jot down these ingredients!” I’ve made the recipe a few times now and it has been a pretty big hit each time. I noticed several people popping the lid off to scoop fruit out and sticking their cups under for more. The rest of the food spread was quite impressive, and sadly I failed to get a picture of it. We had sandwich fixings, salads, sausage balls, spinach dip and fruit trays. We ate. It was delightful. Christine got lots of wonderful gifts and it was really neat to see all her relatives and friends there to celebrate her. The Pioneer Woman Comes to Town

This past weekend I had the opportunity to go the Pioneer Woman‘s book signing. It was originally going to be at a tiny bookshop (Blue Willow Bookshop) but the they weren’t going to have space in their 1200 sq ft store for all the ladies that came out to see the Pioneer Woman. It was moved to Georgia’s Farm to Market. It was an adorable local grocers that had dining room tables all over the place and teas, coffees, snacks, and foods to consume.

We got there a little after 11:00 and got our cookbooks and found our seats. The PW answered questions at 1:00 and then the cattle call began. The 500 or so women were broken into color groups and we were called by color. Mrs. Oswalt and I were part of the “PETAL” group.

While we waited our turn, we drank coffee and looked around at all the interesting teas, coffees, herbs and foods to see. We also talked to these ladies. They were in the “LIME” group.

Sandra and Monica were on hand to converse with us. We talked about which recipes we thought we might try. Monica brought sticky notes and tabs so we could mark recipes.

Then (several enjoyable hours later) Mrs. Oswalt and I met the Pioneer Woman. I told her about the dark chocolate cranberries we ate and she seemed genuinely interested. She truly was friendly and sweet and made an effort to speak to every single person who came. She also gave everyone who came to see her a T-shirt.

We got our cookbooks signed and then he seemed strange to leave after being there for so many hours. The cookbook has pictures of every step of the way, which makes me want to give some of the recipes a chance. The food looks delicious and the photos in the entire book are of her ranch and family. You should probably buy it.

P.S. Sandra and I made the enchiladas and guacamole in the book. It was hard work and my fingers burned from all the cutting. They were tasty!. 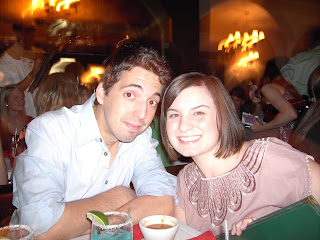 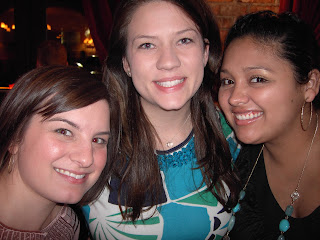 No words needed. Life is good and I am a lucky duck. I’ll feel this way until Monday morning.

Tonight I had dinner with a friend I hadn’t seen since last Spring. It was good to see an old familiar face, but also interesting to see how much had changed since graduation. We worked together at Transportation at A&M. Which translates to me spending around 10 hours a week talking to this girl between “work.” The year we graduated Emily went on several interviews a week. She was honing her skills, but also trying to learn what she wanted. I was so intimidated by all of her interview stories and how much she seemed to be learning. It seemed that there was no way she wouldn’t get a good job. Emily’s out of college job offer wound up being considerably more than mine. But she chose the job that offered her the most money. She spent the next year hating her job, her coworkers, and the expectations of her work. I had known she disliked the job, but I was not aware of the extent.

Emily realized at about the one year mark that she had had enough, and she put her two weeks in, without having another job. She had saved and prepared for possibly leaving, so she was ready to fully dive into the job search. It took her a month, but Emily found a position that she is loving. She is now making what I was offered starting out, and she is much happier. Emily made it clear that she thought the money did not make a difference. If I’m not enjoying my work at any salary, it isn’t the right fit.

I was really impressed with her logic and her approach. I have spent the past year and a half questioning what I should be doing with myself. I’ve wondered if this is right for me. I’ve had bad days and okay days, but I don’t ever think I’ve ever had days in a row where I love what I do. Emily realized the path she chose wasn’t right, and is making headway in correcting it. She’s taking the GMAT coming up, and will start applying for graduate schools. I suppose I admire clear cut decision making because I can’t seem to do it. I’ve lived without furniture for a year and a half because I can’t commit to the purchase.

Seeing an old friend makes me continue to evaluate my own place and current situation. I hope it can inspire me to make some life choices. Maybe I will take her on as a life coach, people in reality shows seem to have them. It could work for me.